A native of Thiruchirapalli in Tamil Nadu, Kyle Kumaran has always loved and followed Racing. Now at 18, Kyle enjoys art, music, Football and gaming with his friends all over the world. This great diversity in his friend group is a result of the multicultural nature of United Arab Emirates, where he has been residing since he was just 6 weeks old.

It was his father, Kumaran Arumugam who used to follow Formula One and that is when the younger Kumaran started getting attracted to the sport. At that young age, it was the red Ferraris that would attract Kyle’s attention. On the weekends he started going to the karting track with his father. As he approached 14, Kyle finally had his first race at the Dubai Kartdrome. Kumaran and his team came in second at the EKSC 2016-17. For Kyle, it was all a leisure activity at first with none of it being planned. It was more of “achieving as we go” as he likes to call it.

The Student Karting Championship (SKC) at Al Ain Raceway was his next big step. He finished runners-up in the individual event. The 12 Hour Endurance Race at Al Ain Raceway came next where he drove for over 4 hours in 2  shifts and his team ended up clinching that title as well. Finally, in January 2017, he began racing in the UAE Sodi World Series (SWS) races at the Dubai Kartdrome. The young Kyle, represented UAE in the Sodi World Finals at Lignano Circuit in Venice in June of 2018. His parents gifted him his first kart – the SodiKart which runs on a X30 Junior engine 270. In the 2017-18 season he signed with the newly formed Brand Racing (previously, SodiKart Middle East). The 2017-18 UAE X30 Challenge was his first full Racing season and he ended the season as Vice Champion – Junior. Not one to shy away from hard work, he completed an internship with Porsche in 2019, to understand the intricacies of automobiles better. 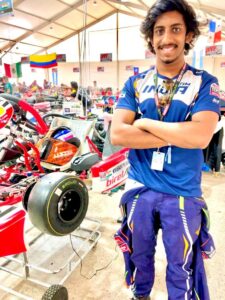 The talented racer believes that to be successful it is important not to get distracted. He believes that the main thing to do, is to be present in the situation; to not think ahead or behind. This mantra helped him immensely during his fight against COVID-19. In January 2021, Kyle fell prey to the deadly virus. Stuck in quarantine, he had to miss 3 races of the Championship he was competing in, at the time. For him, rather than the quarantine, what really derailed his life, was the massacre it caused to his racing schedule just as things were returning to normal after initial outbreak of the disease.

Once he recovered he immediately got back into his training regime of one and a half hour, every other day. He could feel himself not at his 100%, both physically and mentally. However, he was never ready to give up. It is a trait that he shares with racing legend, Ayrton Senna- his Hero. Senna’s sheer talent had mesmerised the young racing talent, who also wants to be as great as the legend.

Always trying to improve upon himself, Kyle believes that be it mentally, or physically, or diet-wise, his fitness regime can definitely be better. He promises that once this hectic Racing schedule subsides a bit, he will be training harder. His schedule has also kept him away from the other sports that he used to play, like Football and Volleyball. The Karate black belt-holder also used to be in a Swimming team. When asked about another sport he would have played, if he had not gotten into racing, the reply was, “Maybe darts. I was quite good. Played the entire four months of quarantine.” He was quick to chime in that despite this liking he has for the sport, Racing will always be the avenue, into which he will pour his heart and his soul. 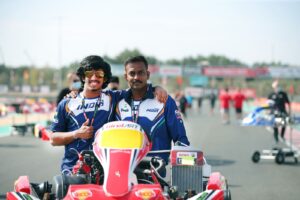 Rather than making changes in his preparation for different races, Kyle prefers to focus on the people who will be in his team for the race. He is a self-confessed, “person of habit”. So if a formula provides success, the 18-year old will continue with it till it ends in failure. That is when he will try to find something else that will pay better dividends. Fortunately for him, one formula that he has not had to alter is his support system.

Talking about his support system young Kyle mentions the names of his UAE team boss, Anjum Shaik, his team boss in India Madesh Lakshman, and his father as well. However, his ‘hugest’ praise was reserved for his mother, who also doubles up as his manager. Denys, his mother, is arguably the biggest reason that Kyle has reached the heights he has today. From managing his jam-packed schedule, to handling his relationship with racing teams, to organising his travels to various events, to handling his social media, to creating a website for him, to clicking photographs at most of his events, to managing the monetary side, all while juggling a full-time job on the side. This superhuman is the rock that Kyle has always been able to depend on both in his career, and his life. 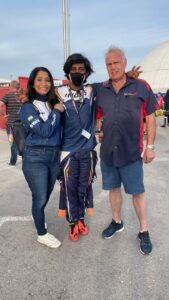 “It’s been a lot of sacrifice”, said Denys, “from both his father and me”. But the reason that both parents are fighting to make his Racing dream a success is the joy that they can see on his face, when he gets into the seat of a race car. They knew, when he started racing at 14, that he was lagging behind the other kids, by around 5-6 years. They realised that they would have to get him as much race time possible. Between his father’s work in Saudi Arabia and her job, the two parents raced against time to devote every free second of their life to ensure that Kyle got the maximum amount of Racing experience.

It is now that they can see their herculean efforts finally paying off, with him finally representing India in World Championships. Prior to this, Kyle has represented UAE. However he made his allegiance to India quite clear, “I am Indian at the end of the day, so representing India, means more.” His goal is to become the first Indian World Champion in Formula 1, Formula E, WEC or Indycar. After his silver win at the Rotax Max Challenge Grand Finals, a beaming Kyle said, “Representing India has been a dream and I am thrilled and happy to achieve it. Seeing the Indian flag on the podium is a proud moment and I will cherish it forever.”

With all of his achievements, it would be quite easy to forget that he is still a student. He has been homeschooled with iCademy Middle East, for the last four and a half years, and is presently in his final year. He is looking to graduate in Business & Marketing, with a focus in Motorsport. Despite the success he has achieved in homeschooling, he believes that it might not be the option for everyone. He believes that the success of homeschooling depends on the family more than the athlete. However, he soon gave another example of the wise head he has on his young shoulders, when he also quipped that at the end of the day homeschooling also involves self-management, which not lot of people are very good at. “I fail at that sometimes as well. But that’s normal for 18-19.”, said Kyle, with a chuckle.

At 18 Kyle has already developed into a talented and hard-working racer, who is very clear about and focused on his goals. Surely every Indian is proud of what he has achieved and will have their eyes glued to their television screens, everytime time Kyle Kumaran gets into the seat of a race car. His mother summed up what he’ll need to reach those goals that he has set for himself, in his mind – “A lot of hard work, dedication, sacrifice, a little bit luck, and a lot of God’s Grace!”

Previous After Habas fiasco, ATK Mohun Bagan appoint Juan Ferrando as their head coach
Next Arif Khan becomes the first Indian to qualify for two events in a single edition of Winter Olympics