UPDATES
Home / EXCLUSIVES / ACHIEVERS / For Kartik Sharma, the transition from Tennis to Golf paid off

For Kartik Sharma, the transition from Tennis to Golf paid off

Ever since he made the transition from Tennis to Golf at 11, Kartik Sharma’s journey has been about taking risks and pulling them off.

Sans grit and focus, it would have been tough to start from scratch after making a mark in Tennis. That risk was born on the greens of the Army Golf Course in Mathura, not exactly the ideal breeding ground, but it has paid dividends down the line. 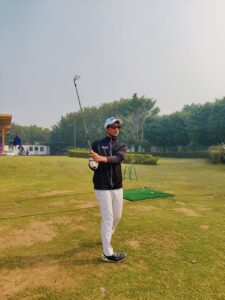 Kartik Sharma started his Golf life by switching from Tennis.He had a steady growth till the country went into a forced lockdown for the second time in March 2021. The Delhi-NCR Open, the last event on the Professional Golf Tour of India (PGTI) before the stall, was a career best for 21-year-old Kartik. He finished 7th and hence the determination to not let the virulent virus hamper practice during the time indoors.

Restart was eagerly awaited, and in anticipation Kartik set up a facility in Lucknow, where his father is posted. The living room carpet was placed in the backyard and served as a hitting net from close quarters. The manicured grass was the putting and chipping area, and the venue for the fitness drills. All in all, it was a packed schedule.

“The routine never stopped; I never took a day off,” said Kartik. But there was a pause, one that shook the young man to the core and lent perspective in matters other than Golf. Kartik’s family contracted COVID in early May, he got infected a second time, mother Sudha spent almost a fortnight in intensive care and his grandmother succumbed to the virus.

It was traumatic to say the least and that did not go unnoticed by the parent despite being very sick. “It was at her insistence that I got back to practice,” said Kartik, but not before that dark phase let it dawn that “family ranked much higher than Golf”. He slowly slipped into a schedule and by August was into real-time practice at the DLF Golf and Country Club in Gurgaon, his training arena for long. 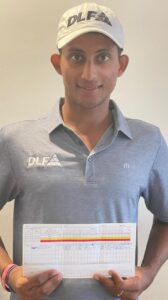 Perhaps it was what he had been through that it took time to adjust to real-time practice before action started on Tour. Picking up from where he left off in March, Kartik carried on in the same vein. He started well with the Golconda Masters. A smile played as Kartik posed with the scorecard that has class written all over, but there was reflection as well that a high on the Golf course can never surpass the pain of watching a loved one suffer.

Things settled down gradually after that and Kartik Sharma finished the 2020-21 season on the PGTI as the top emerging player, and the pock-marked calendar has seen instances that sum up his journey.

Punching above the weight is what drives him, be it teeing off with 103.5 fever in Jaipur or shooting a 59 and 60 for ballistic rounds across tournaments.

Outside Golf, Kartik has set up home by himself in Gurgaon and claims his culinary skills are good too!