UPDATES
Home / EXCLUSIVES / “I just kind of gave up after the tragedy, but my parents would not have liked it….,” Jeev Milkha Singh

“I just kind of gave up after the tragedy, but my parents would not have liked it….,” Jeev Milkha Singh

Jeev Milkha Singh has always maintained that he is fortunate to earn a living out of something he loves. But what could he do when the people, father Milkha Singh and mother Nirmal, responsible for introducing him to the sport, were cruelly snatched away in the space of five days? Jeev decided to walk away as Golf reminded him of them. But an athlete never quits, and Jeev is back.

The winner of 21 international titles, having his signature course in Ahmedabad, a tournament host on PGTI and soon going to play the senior tour- Jeev Milkha Singh’s journey from the start and now looking ahead…. 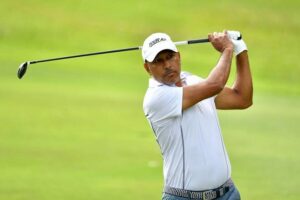 Jeev Milkha Singh: Honestly, I am a very fortunate human being. Golf was introduced to me by my parents. Unfortunately they are not here. I lost them in June. I feel that every human being has to go through his journey to find peace when a tragedy like that hits a family.

Coming back to Golf, I have thoroughly enjoyed it. Made a living on what I love doing. I started my journey when I was 9 years old – came with my father to the Golf course, was introduced to the sport, and had 4 or 5 young players of my age. So we used to have a lot of competitiveness between us, that pushed us to become better players representing the country. Later, we became professional golfers, played globally, won a lot of tournaments all over the world. Talking about the senior tour, in fact I am looking forward to it. I am in all the majors next year. I should be playing close to about 30 to 32 tournaments globally. My only worry is the jet lag. Hopefully I can cope with that.

The journey has been fantastic. I just feel that as a golfer I’ve made such good friends all over the world, who are there for me all the time. And when I meet them it’s like reliving the memories. It’s fantastic! I think it’s one of the best games I could have been introduced to. It’s the best equalizer. One day I shoot under par. Next day I don’t even know whether I am going to shoot under par. So it keeps you close to human life.

Jeev Milkha Singh: I think what’s gonna keep me going is that my parents introduced me to the game. I am sure they are looking at me from up above. I want to win as many tournaments as possible, like I did on the main tour. I would like to do it on the senior tour, and hopefully a major championship. I always wanted to win a major championship before my career is over. That’s my goal and I think that’s what’s gonna keep me going.

The things in mind to take care of the body….

Jeev Milkha Singh: I think the most important thing to last out on the senior tour is your body, and the fitness. For fitness I go to the gym three times a week. That’s fine! But when you play tournaments what happens is that you are going all out. And, sometimes you push yourself so much that injuries creep in. And if you don’t get them fixed right away, it’s going to carry on for a longer period of time and then you have to take some time off. When I play the senior tour, I am going to invest in a physio, who’s going to travel with me week in week out, who knows my swing, who makes me work out, stretches me in the morning, stretches me in the evenings after the rounds. So I think the question you asked is a very important question. And I see Bernhard Langer, he’s 64 and still going strong, and that’s the only reason. 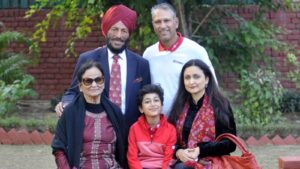 Preparations after the tragedy…..

Jeev Milkha Singh: Lately, to be honest, I have not played Golf at all. Because, I just kind of gave up after the tragedy. I didn’t feel like playing. But I’ve started, because I didn’t want to set a bad example for my son, that the father has given up. And my parents would not have liked it too. It’s not going to be a break anymore. It’s going to be full-time work, which consists of gym work, which consists of hitting a lot of Golf balls, chipping, pudding, getting the body used to, getting the golfing muscles activated again. Because, sitting around, lying down on the bed and thinking what’s happened in life, they don’t help. So I have to make decisions where, you know, I have to go out there and be ready and prepared. Starting next year I would hopefully play some events on the Asian Tour, before I hit the Senior Tour. That’s what the plan is and hopefully, it’s possible, depending on if this pandemic doesn’t come back again.

Tee off in Japan….

Jeev Milkha Singh: I love playing in Japan. I have a lot of wins out there, and good memories. And it brings some positive thoughts in my mind. So, I’d like to start from there. So, I’m going to start at the end of March in Japan. There are going to be about 18 to 20 tournaments on the Japanese Tour – Senior Tour. So, I’ll play maybe four weeks in Japan in April, or maybe till May. And then move on to Europe, and then to the US, depending on when the major championship is. And then I’ll shuttle between Europe and Japan. But, my goal is to basically play about six to seven events on the Champions row which includes three Majors, and hopefully, I can get three or four invites on the Champions Tour. And I’ve taken up associate membership as a Champion of the European Tour.

Message to the youngsters….

Jeev Milkha Singh: You know I’ll give you my example. When I went to the US, I played College Golf there. What happened there was if you wouldn’t get good grades, you won’t play for the team, that’s it. So, I think it’s a perfect balance there. And when you are a youngster of 20-21, then you can decide what to do? Like I was 21 and that’s when I made the decision to be a professional golfer. But the basic education for me is very important. Because if after 4-5 years as a professional athlete, you’re doing very well and you get injured, what do you fall back on? You’ve got to have something to fall back on. That’s your education. That is one way of looking at things. The other way of looking at things is- Hey, you know what, I love this game and I’m gonna make a living out of it. I don’t care whether I have a Basic Education or not. I’m just gonna give it 100 percent.