The Tokyo Olympics will always remain a huge landmark in the history of Indian sports as this was India’s most successful Olympic campaign with 7 medals – 2 silver, 4 bronze, and one historic gold of Neeraj Chopra.

The gold medal of Neeraj Chopra that came with a throw of 87.58 m in the final of the Men’s Javelin Throw is the first-ever Indian Athletics medal at the Olympics. Chopra has also become India’s second-ever individual gold medal-winning athlete, after Abhinav Bindra picked one up at the 2008 Olympic Games in Men’s 10m Air Rifle. 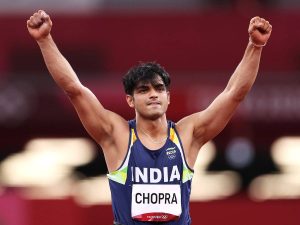 On August 4th, Neeraj Chopra qualified for the final with a first throw measuring 86.65m. He carried his great form into the final and was on song right from the outset. He recorded 87.08 m and 87.58 m respectively, in his first two throws. He was really dominant in the final and no one could match at the level that he was performing. In fact, his first throw of 87.08m would have been enough for him to pick up the gold medal and he was guaranteed the gold even before making his final throw when Jakub Vadlejch of Czech Republic failed in his final attempt.

Hailing from the village of Khandra, in Haryana’s Panipat district, Neeraj, a junior commissioned officer in the Indian Army, has completed a huge long journey to his gold glory at the Tokyo Olympics. As early as 2016, he was already being regarded as a top-level prospect after he won the IAAF (International Association of Athletics Federations) U20 World Championships, at Bydgoszcz in Poland. Though his 86.48 m throw was a world junior record, unfortunately for Neeraj and India, the tournament was simply too close to the 2016 Rio Olympics, for Neeraj to be able to qualify for the Games on the basis of that score.

So Neeraj set out on a mission for the following four years, where the whole world witnessed the meteoric rise of one of the most exciting young talents in the world of Athletics. He won arguably every noteworthy tournament. In 2018, he bagged gold medals at both the Gold Coast Commonwealth Games and the Jakarta–Palembang Asian Games. He was forced to stay in Patiala for an extended period of time in 2020, because of the COVID-19 lockdown. As soon as it ended, he was back at it again, first setting a new national record, with a mammoth 88.07 m throw. Then he also travelled to Europe to participate in events both in Portugal and Sweden to stay in peak form for the Tokyo Olympics. 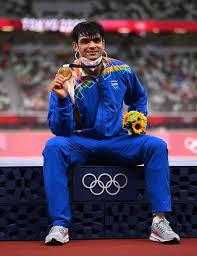 Something that Neeraj must thank for his incredible Olympic success, was the fact that all the sporting organisations behind him, ensured that they did not clash against each other at any point in time and tried to give him everything that would increase his chances of winning. He got a permanent job in the Indian Army and all the time that he needed to train. After that TOPS (Target Olympic Podium Scheme)- the Indian government scheme for supporting the country’s elite athletes- came in and started working in tandem with JSW, to create the perfect support system for Neeraj. JSW had been backing Neeraj since 2016.

“Koi kasar nahin chodenge”, which translates to “will spare no effort”, was Neeraj Chopra’s last text that he sent to one of his support group members at Inspire Institute of Sport (IIS) in Vijayanagar. It is the JSW Group’s high-performance training centre for athletes. 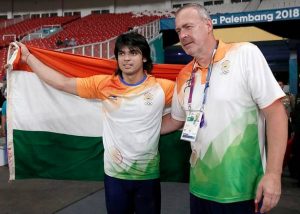 Neeraj Chopra also had a great coaching team backing him all the time. He had his personal physio who would accompany him, a great coaching team which includes some of the best in the world- Gary Calvert from Australia, Werner Daniels from Germany, and currently Uwe Hohn, the German Javelin legend. Hohn has been a huge reason behind Neeraj’s Olympic success.

Uwe Hohn holds the record for being the only athlete to ever have thrown a javelin beyond 100 metres. He made a massive 104.80 m throw in 1984, Berlin. However, the year of 1986 saw the implementation of a new javelin design, which meant the records had to be restarted.

Incidentally, 1906 was the first edition of the Olympics which saw the introduction of the Javelin Throw as a Track and Field event.. It was a freestyle event, governed by very limited rules and regulations over its design. After the formation of IAAF, or the International Amateur Athletic Federation (formerly), in 1912, a set of strict rules and regulations were introduced about how the sport would be designed.

The winning distances gradually kept increasing in the following editions of the Summer Games, until Hohn set that behemoth of a record – 343 ft and 9¾inches.  However, these massive throws posed significant safety risks, since it was possible that the javelin might overshoot the stadium and fly into the crowd. Moreover, the number of times the javelin would land flat on the ground kept increasing steadily. Since the completion officials declared these throws to be invalid, it often ended up with heated protests.

The IAAF made multiple alterations to the design of the men’s javelin, and the redesign was put in effect from the 1st of April, 1986. The centre of mass was moved 40mm forward from the centre of pressure. The javelin’s tip also underwent modifications, which made them more blunt and less aerodynamic. As a result the javelin travels a considerably lesser distance and comes down at a steeper angle, which helps it get stuck into the ground, instead of just laying down. 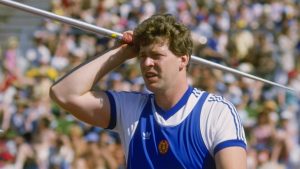 As a result of these changes, Hohn,born on 16 July 1962, saw his record become the “eternal world record” in 1986. Hohn has won both the IAAF World Cup and European Cup. 1986 was a really big year for him. Not only was his 104.80m throw made into the “eternal world record”, but his career also came to a close that same year due to multiple setbacks because of a surgery. Hohn retired from competitions and became a coach. In 2017, the Athletics Federation of India ‘signed him on’ for coaching the Indian Javelin squad, which included the then Junior World Record Holder, Neeraj Chopra. 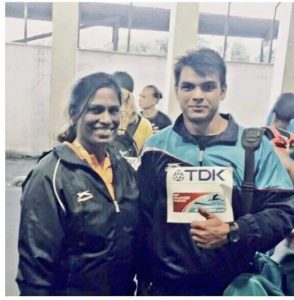 Neeraj Chopra’s gold ended India’s 125-year wait for an Olympic medal in Athletics. One of India’s most legendary athletes, P. T. Usha who came agonizingly close to lifting a medal at the 1984 Games, wrote on Twitter, “Realised my unfinished dream today after 37 years. Thank you my son @Neeraj_chopra1 #Tokyo2020,“. This was accompanied by a photo of her with the 23-year-old Olympic gold medallist.

Another Indian sporting legend, Milkha Singh, who was dubbed as the “Flying Sikh“, achieved  4th place in Rome in 1960. He had once famously said, “I failed to win a medal in the 1960 Rome Olympics, and it hurts me till today. More than half a century has passed since then but no Indian has been able to win an Olympic medal in athletics. It is my last wish to see an Olympic medal around an Indian athletes’ neck on the podium at the Olympic Games“.

The man who would constantly wish to see an Indian athlete win the Olympic gold in Athletics, unfortunately passed away this year in June. His son, Jeev Milkha Singh, graciously thanked Neeraj, after the latter dedicated his Olympic gold to Milkha Singh.

Jeev said, “Dad from above is crying in joy. His dream has come true. Proud moment for India. I salute him for his determination and hard work. God bless him.”

Along with Neeraj’s incredible display, the 4×400 m Men’s Relay team, which included Muhammad Yahiya, Noah Tom, Arokia Rajiv, and Amoj Jacob, missed out on qualification, even after putting a record-breaking display.  The competition was so high that even after setting a new Asian-record, they came in fourth. However, these great performances are testament to the fact that the Indian athletes are no longer in it just for the sake of competing. They are starting to believe that they can really win, or book a place on the podium, at the very least. It seems that if they can be financed properly and are helped in converting their talent into tangible results, Indian Sports has a really bright future.