Shiva Thapa, who hails from a small Assamese village, is a significant character in Indian Boxing. Already a 2-time Olympian, Thapa is eyeing to become the first Indian male boxer to win his second medal in World Championship.

Son of Padam Thapa and Goma Thapa, Shiva Thapa is the youngest of 6 siblings. His father worked as a Karate instructor in Guwahati and prior to that he used to be a street food seller. Shiva started showing a keen interest in the sport of Boxing from the young age of 7. The bouts of Mike Tyson motivated him further.

The initial days of his training and practice were tough for the family; but his father ensured that he could keep on practicing. The raw talent was identified by the sporting fraternity and soon young Shiva was chosen to be part of Olympic Gold Quest’s 2016 vision plan.

Thapa’s indomitable spirit saw him debut at the 2012 London Games, as an 18-year-old boy, in the 56kg Bantamweight division. Prior to that he had bagged the silver medal at the 2010 Youth Olympic Games, held in Singapore Unfortunately, he saw defeat in the first round of the 2012 Olympics after he went down to Mexico’s Oscar Valdez Fierro, 9–14. 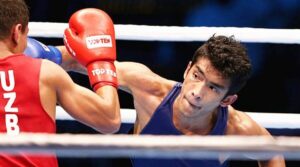 In 2013, Shiva Thapa became the youngest boxer to win a gold medal at the Asian Confederation Boxing Championships at Amman in Jordan. It was followed by a bronze in 2015, a silver in 2017 and another bronze in 2019. This year he secured a fifth successive medal at the prestigious tournament in Dubai. “Wow! I didn’t really know that it would mean so much statistically. I never thought I would be the first to do something like this. It is a good record to have against your name,” Shiva told PTI.

The 5-time Asian medallist had qualified for the 2016 Rio Games as well but failed to move beyond the first round. The sole reason for him not being able to compete in the Tokyo Games was because Manish Kaushik claimed the slot in the very first qualifier. But Shiva knows how to move forward with his Boxing.

The 27-year-old Thapa is making a return to Boxing, after a period of absence due to COVID-19. He will be competing in the World Championship starting from 24th October at Belgrade in Serbia. The fact that he has been rebuilding himself is evident from the fact that he won the gold medal at the 2021 National Boxing Championships at Ballery. But with age, Thapa also seems to have nurtured an experienced head on his shoulders.

“Being the most experienced means more responsibility. I would like to look at it this way. My job would be to ensure there is a good vibe in the squad, keep the fire ignited going forward,” said the light welterweight boxer. He has had a bitter-sweet experience at the world championships. Despite winning a medal in 2015, he was forced to withdraw without competing in Hamburg in 2017, owing to a stomach ailment.

Shiva Thapa aims to create history at the world championships by winning another medal and etching his name forever, into the history books. “We have a really good team. And I believe all of us are going to do well. It is my third world championship and it would be memorable if I win a medal,” he said.