The Indian women created history; with their win at Harrup Park in Mackay, India not only ended Australia’s record of 26-match win but also registered their highest ODI run chase.

The Australian women’s team  posted a total of 264-9 of 50 overs after winning the toss and electing to bat first. Ashleigh Gardner and Beth Mooney scored 57 and 52 respectively before Tahlia McGrath cracked a rapid 47. Pooja Vastrakar and veteran Jhulan Goswami both took 3 wickets. Goswami also crossed 600 wickets in her career in this match. 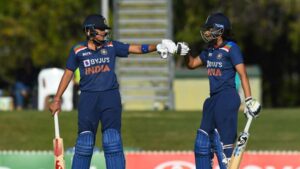 The Indian women, who had already lost the first two matches of the series, displayed great resilience while chasing a total of 265. They began their reply steadily when Shafali Verma and Smriti Mandhana putting on 59 for the opening wicket. After Smriti’s dismissal at 22, Shafali  joined with Yashtika Bhatia in a partnership of 101 .
At this stage the Indians were sailing smoothly towards a win, but some superb catching and bowling from the Australian women changed the course of the match. There were quick wickets of Verma, Bhatia, Mithali Raj and Richa Ghosh. But Deepti Sharma pulled the innings again with a patient 31 runs along with Sneh Rana’s swashbuckling 30 runs of 27 deliveries.
After Sharma and Rana’s exit, the match went down to the final over with five runs left for India to win. In the second ball of the over, Jhulan Goswami stepped out to hit a boundary and bring Australia’s 26-match winning run to a halt. This is also Indian women’s highest total while chasing. 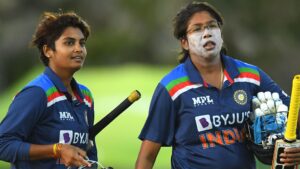 An ecstatic Jhulan Goswami said after the match, “We were just trying to win the game, try to stay there and finish the game. It’s important to give your best in the field, take positives and that’s what I want to do as a senior. Lots of aches in my body, need time to recover, but we’re looking forward to be a part of the pink-ball Test.”
Australian women had previously lost an ODI  in October 2017 against England. It took three years and eleven months for another team to end their great run. “It was important to bounce back from the second match, that loss hurt us, but it did set-up the girls as they knew that we could put up a good score. It was good to chase, we are good in that, but I think the last game gave us confidence going into today’s encounter,” Mithali Raj concluded after the win.

Previous Gobar Goho, the ‘Wrestling Prince from Calcutta’, whose name now only stands as one of the lanes of North Kolkata
Next Shiva Thapa: The 5-time Asian Boxing Champion gears up for his 2nd World Boxing medal