Rosario pays homage to Messi; a 69m tall mural unveiled in his hometown

Local  artists in Lionel Messi’s hometown, Rosario, paid tribute to the Argentine legend by designing and painting a 69m mural of the ‘little magician’. 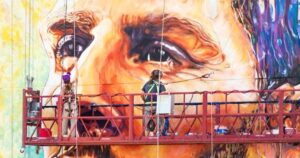 Marlene Zuriaga and Lisandro Urteaga are responsible for designing and painting the graffiti, titled “From Other Galaxy, From My City”. The painting portrays Messi as captain of the national squad, donning his trademark number 10 jersey, with his hand on his chest and a bright sun lighting him up.

Rosario authorities, who organised the whole thing, invited a group of primary school children to come and attend the inauguration ceremony. The piece is a segment of a broader project titled as “Common Messi”. The goal of this project is to spread the image of the Argentine superstar, all over the city buildings. 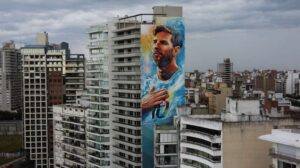 Messi, who is now a Paris Saint Germain player, took his first steps in Football at his Rosario neighborhood club Grandoli, where he was coached by his father. Later, at the tender young age of six, Messi, whose footballing talent was already on the rise, moved on to Rosario’s first division Club, Newell’s Old Boys. During the six years he played for Newell’s, he scored almost 500 goals as a member of “The Machine of ’87”, the near-unbeatable youth side named for the year of their birth.

“When you saw him you would think this kid can’t play ball. He’s a dwarf, he’s too fragile, too small. But immediately you’d realise that he was born different, that he was a phenomenon and that he was going to be something impressive.”