UPDATES
Home / TRENDING / LATEST / Tokyo Paralympics: All his efforts, from mediation to setting up shooting range, culminated in bronze medal for Singhraj Adana

Tokyo Paralympics: All his efforts, from mediation to setting up shooting range, culminated in bronze medal for Singhraj Adana

Singhraj Adana amassed a score of 216.8 to secure the bronze medal in the P1 Men’s 10m Air Pistol SH1 Final at the 2020 Tokyo Paralympics. Chao Yang, and Xing Huang, both from China, took home the gold and silver medals respectively. 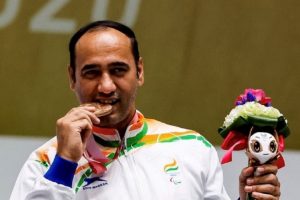 Singhraj Adana’s bronze became India’s second medal in shooting after Avani Lekhara’s gold in the Women’s 10m Air Rifle SH 1. His medal-winning score of 216.8 comes on the back of him qualifying for the eight-man final in Tokyo, as the 6th-best shooter. He made a strong start to the qualification round, as he accumulated 95 and 97 in the first couple of series. His third series ended with a 93, which was a big cause for concern for him. However, he soon made a comeback with a 95. Adana had a 92 and a brilliant 97 in the last 2 series respectively, which were just enough for him to book a place in the final.

In the event finals, Singhraj Adana kept hovering around the medal spots. At the end of his first 10 shots he had amassed 99.6 points and he was in the top 3. All the pressure came on Adana, after India’s other shooter Manish Narwal continuously kept shooting in the 9 range and finished 7th in the finals.

“When Manish Narwal was eliminated I was sad but soon realised that I need to continue my fight.”

Adana’s poor 19th shot ensured that he dropped out of medal contention. His score of 9.1 saw him move down into fourth place and out of the medal contention. But then he took aim to shoot a 9.6 in his 20th attempt. In his final 2 attempts he notched up a couple of 10.0s and moved to the third position. But unfortunately it was too little too late to displace the Chinese pair from the top 2 spots.

Hailing from Bahadurgarh in Haryana, Adana’s grandfather had been a part of India’s freedom movement and had also served in the British Indian Army, at the time of World War II. Singhraj was identified with polio at a young age.

“I had polio on both my legs and needed crutches to walk. But my mother, who has always supported me along with others in the family, would tell me, motivate me to stand on my own legs.” 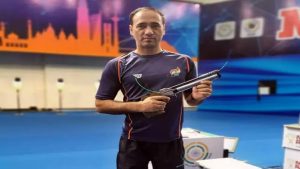 The 39-year-old started playing the sport only four years back. He was also the chairman of the Sainik School in Faridabad.  This is the debut Paralympic campaign for the para shooter. Adana came into the Games on the back of a gold at the 2021 Para Sport World Cup held in Al Ain, UAE. There he had beaten 2016 Rio Paralympics bronze medallist Server Ibragimov by 2.8 points.

COVID-19 came in the way of his preparation and Adana started getting frustrated due to lack of training. That was when his coaches suggested to build a Shooting range at home. However, for someone who once watched his wife selling her jewellery to support his Shooting dream, he knew the move was a huge gamble.

“My mother only asked me to ensure that we are able to feed ourselves later on if something went wrong. But thanks to my family and coaches’ support, the green signal and help from the Paralympic Committee of India and NRAI, we succeeded in my mission and the range was soon up and running,”