Uday Deshpande and his tryst with Mallakhamb 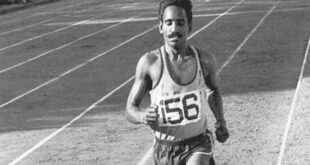 It was late 1950s. India had tasted independence some years back and people were trying to overcome the effects of colonialism in every aspect of life. Sport was no different. While cricket had a steady growth, many people took to yoga and martial arts that had a strong essence of Indianism. It was by this time, a little boy of barely 5-6 years often travelled from Mumbai to Pune to his maternal grandfather’s house. While the patriarch practiced yoga every morning, the boy would sit in front of his grandfather and imitate his actions. The spark in his actions did not go unnoticed. Being an experienced yoga practitioner, the boy’s grandfather personally trained him and eventually inspired him to take up Mallakhamb as a sport. It was the beginning of a journey; a journey that started 60 years ago; a journey of Uday Deshpande from a little boy to being the premier exponent of Mallakhamb in the world.

As a boy, Uday started his Mallakhamb training in Samarth Vyayam Mandir located at Dadar in Mumbai. Those were the days when he totally enjoyed the sport; climbing up the pole, concentrating hard to complete a posture, those nerve-wrecking moments of losing his balance and then gradually becoming a master in it. He grew with the sport; it made him strong, powerful and mentally rock solid. Mallakhamb contributed so much to his physical and mental fitness that from 1966 to 1975 Uday Deshpande won several district, state and national-level competitions in Mallakhamb, Yoga, Gymnastics, Kho Kho, Basketball, Volleyball and Wrestling.

It was by that time, Uday became a matured young man who shouldered the responsibility of his family. After completing his Bachelor’s Degree in Chemistry and Botany, he took his job in Customs and Central Excise. But that did not keep him away from his favourite sport. It was like a lifeline to him. 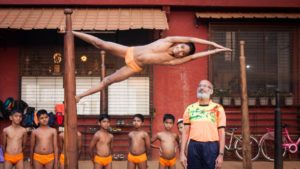 He graduated from a player to a coach and students thronged to Samarth Vyayam Mandir to train under an excellent Guru. Every day he reached there at 4:30 in the morning, trained his students, went to his profession at around 10am, came back at 6 in the evening and headed straight to the training centre again. Such a rigid disciplinarian is he that there is no change of his daily routine even today. The only change is he has now retired from his job and thus spends more time in his abode of peace.

Samarth Vyayam Mandir is that abode; perhaps in all these years he has spent more time there than in his own home. And in this journey throughout, he is aptly supported by his wife. Their children Omkar Deshpande and Aditi Deshpande both were multiple times national champions in Mallakhamb. Not only his own children but ‘Deshpande Sir’, as he is respectably called, has produced more than 100 national champions. To popularize the sport he conducted innumerable coaching camps in different Indian states. Simultaneously, he propagated the sport in European and American countries too. From 1998 till today, Uday Deshpande’s artistic approach helped this very Indian game to spread its wings in Western nations. He demonstrated Mallakhamb in United Kingdom, Czech Republic, Italy and United States of America. But it has become most acceptable in Germany. For the last 14 years, in every August-September, a team of 10 Mallakhamb students guided by Uday Deshpande visits Germany to demonstrate the newer aspects of this sport. 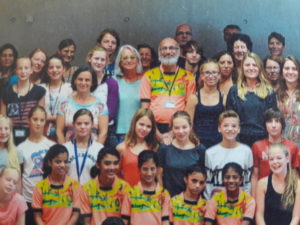 But perhaps the most notable achievement of ‘Deshpande Sir’ is when he won the challenge of teaching Mallakhamb to visually-impaired students. It was a chance meeting with some non-sighted school girls that gave him the idea of teaching them. The foremost task for him was to communicate his actions through precise words. They were not there to imitate his actions, but were there to imitate his words. Once he made a way out to connect with them verbally, he overcame all the difficulties. The girls had faith in him and obeyed his commands (“put your right leg inside”, “pull yourself up”, “take a swing”, “hold it with toe”)to create some unique postures on the rope. Their sightlessness has made them fearless. And when they perform flawlessly, the world remains awe struck. Uday Deshpande is the person behind this surprising fact but he always thanks those girls who had taught him how to teach.

This humbleness of Uday Deshpande has made him the main protagonist in this stage. After so many years, he is still passionate about this sport. His day still begins at 4:30 am and ends at 10:30 am and in the midst he thinks, discusses, ponders and perhaps even dreams about Mallakhamb.

Previous Chhetri seals India’s victory over Kyrgyz Republic
Next ‘For Me, For You, For All’-the motto of Mallakhamb Day 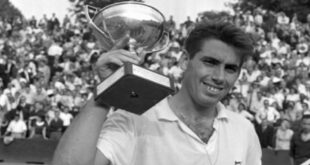