Is there a link between microorganisms in our gut and athletic performance? Yes, there have been studies indicating the impact of gut microflora on physical fitness.

Our microbiome is just as unique as our fingerprints. Various factors like the kind of birth (vaginal or caesarean delivery), drug usage, stress and diet are instrumental in determining the makeup of the gut microflora. In microbiology, collective bacteria and other microorganisms in a host are historically known as flora.

It has been found that better cardio-respiratory fitness can be associated with greater microbial diversity and higher abundance of health-promoting bacterial species like Akkermansia muciniphila. An important function of the gut microflora or microorganisms is to assist in the breakdown of complex carbohydrates into short-chain fatty acids (SCFAs). Produced solely by the gut microbiota (generally in response to dietary fiber), common SCFAs like propionate and butyrate, which act as energy sources in the muscles are associated with enhanced fitness and overall health. Interestingly in case of elite athletes, increase in microbial pathways affiliated to ATP metabolism have been observed. Thus, a potential correlation between the microbiome and fitness can be established. 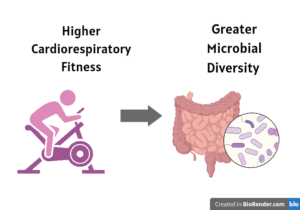 Experiments have brought into attention that the genus Veillonella is more abundant in runners as compared to people leading sedentary lifestyle. It has been observed that after endurance sports, lactate is produced in abundance as it is a by-product of anaerobic respiration. It is this lactate which causes the aching sensation in the muscles following intense bouts of exercise and can be metabolized by bacteria belonging to the genus Veillonella. The propionate produced by it promotes muscle function while butyrate increases mitochondrial activity which is important for energy homeostasis during physical activity. A feedback loop is thus established which is beneficial to both the athlete as well as the bacteria. “Someone exercising regularly is creating this metabolic niche for lactate-utilizing bacteria like Veillonella,” says Aleksandar Kostic, a microbiologist at Harvard.

Exercise resistance, generally associated with diabetes, refers to the phenomenon wherein metabolic benefits from exercise are not derived, which basically means that the body is not responding to the exercise. The interface of microbiome with exercise physiology could be suggested from the spike in levels of butyrate and propionate observed after exercising in people who are actually able to derive benefits from it. “If we can identify people with exercise resistance, we can potentially restore microbes that might help,” added Kostic.

However, the usage of fitness associated microbes as drastic performance boosters should be resisted. It should be kept in mind that the metabolically favourable and diverse microbiota observed in the gut of elite athletes is the cumulative effect of many years of high nutrient intake and optimal physical training for sports participation. Mindful and supervised training is absolutely essential as prolonged and excessive exercise have a detrimental effect on the gut like increased intestinal permeability. Also, the influence on gut microbiota varies with respect to the sport and the training regimen specific to it. 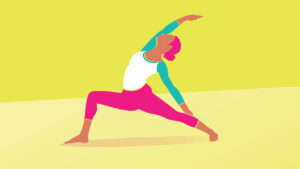 Regular and consistent workouts ensure the creation of an exercise-friendly microbial ecosystem along with building muscular strength and lung capacity. Exercise and dietary intake ensure more fecal metabolites (microbial SCFAs including acetate, propionate, and butyrate) which indicate enhanced muscle turnover and overall physical fitness in athletes. The gut microbiome of elite athletes seems to have a functional capacity primed for tissue repair and increased ability to utilize energy obtained from diet accompanied with enhanced carbohydrate metabolism, cell structure, and nucleotide biosynthesis. Exercise could thus be instrumental to alter the microbiota composition of gut as well as restore gut symbiosis. The shift in the metabolic capacity of the gut microbiota induced by exercise is transient in nature and is likely dependent on repeated and consistent exercise stimuli.

Overall physical activity appears to enrich the bacterial diversity of the gut and improve microbial pathways which have the ability to produce substances that have a positive impact on sports performance. This makes it necessary to not only ensure the calorie and nutrient intake while planning diets for athletes but also the inclusion of food items that promote healthy gut microflora.  The data in this realm is still in its infancy but it is worth exploring. Putting in efforts to understand the mechanisms by which the gut microbiome influence athletic performance would help coaches and athletes to obtain better results in competition and reduce the recovery time after training sessions.