UPDATES
Home / EXCLUSIVES / ACHIEVERS / Dueball starlet, Pankaj Bhardwaj, reflects on why he loves the sport and how it will surely become popular

Dueball starlet, Pankaj Bhardwaj, reflects on why he loves the sport and how it will surely become popular

“I can’t keep calm when Dueball’s on”. That is what Pankaj Bhardwaj has to say about how much the sport means to him.

For the uninitiated, Dueball is a hybrid sport that was both invented and developed by Firoz Khan on Indian soil in Nagpur. It has quickly gone on to become one of India’s fastest growing sports. [For more information on the sport refer to Sportsavour’s cover on Dueball.]

Now coming back to Pankaj Bhardwaj- he is an extremely promising Dueball player who hails from the state of Jammu and Kashmir. Bhardwaj comes from the city and municipal committee of Udhampur, that has a population of less than a lakh. Bhardwaj is presently pursuing an MSc degree after completing his graduation (BSc) in the past year. 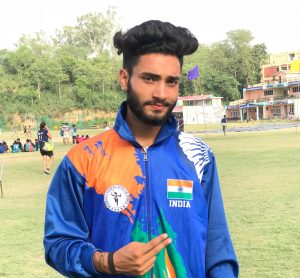 Pankaj started playing Dueball back in 2017, when it was still early days for the sport and it had not grown in popularity, as much as it has now. Despite playing other sports like Handball and Cricket, that require the presence of good hand-eye coordination, it is Dueball that really appeals to Bhardwaj. In his own words-

“Dueball is a sport which is new and engaging. The rules governing the sport make it way more interesting than other sports and it is very effective in building proper fitness, stamina, and of course, skillful hand-eye coordination.”

Talking about the similarities and differences that Dueball has to other sports, Bhardwaj said that Dueball is primarily based on Handball that has adopted a few rules from Basketball and a few from Hockey and some from Football too. However, despite being influenced by so many sports, it is still unique and helps in the all-round development of the person and the athlete. Most importantly, it is a sport indigenous to India. 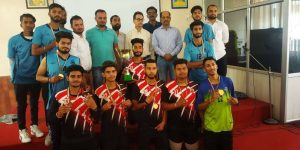 Bhardwaj is well on his way to becoming a seasoned pro in the sport with 4 National-level Dueball Tournaments and 2 International ones already under his belt. Within this time he has already secured 2 international medals and was the second runner up in the Senior National Championship. According to him-

“Dueball is not just a hobby for me anymore. It holds a lot more importance and meaning for me. In the next 10 years Dueball will get massive international recognition that the sport deserves.”

Despite this innate confidence he has in the sport, Pankaj Bhardwaj accepts that there can be areas where Dueball can be improved. The DFI (Dueball Federation of India), which is the governing body of the sport in the country, is already trying to reduce problems like eliminating variations in the rules of the games, as they often lead to disconcertion among players and even audiences.

Pankaj Bhardwaj wants to be a part of all the ups and downs of the sport and so it is needless to say that he wants to remain associated with the game even after his playing days come to a close. He confidently refers-

“It is only a matter of time before Dueball becomes the most popular sport in the world.”

Previous Olympics with ‘No Spectators’- the first time ever in the history of the Games
Next ‘Babe’ Didrikson Zaharias: an extraordinary Track and Field Olympian who excelled in Golf and was proficient in a handful of other sports as well